We translate the concept of precision medicine into acute care. Our biomarker-guided approach enables us to identify the patients with loss of vascular integrity as an underlying pathophysiological disease mechanism and to treat patients that will most likely benefit from Adrecizumab therapy.

Adrenomed’s business is effectively secured by a strong IP position with granted patents in all major markets.

Adrenomed is based in Hennigsdorf near Berlin, Germany. 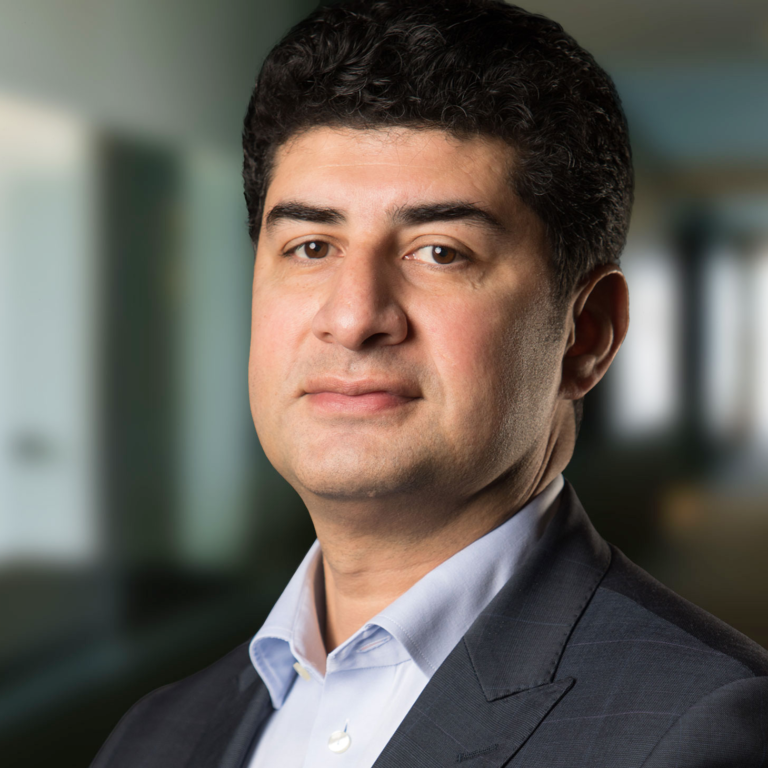 Dr. Richard Jones, Chief Executive Officer (CEO) of Adrenomed, provides over 25 years of experience in the pharmaceutical and biotech industry with a strong record of achievements in business, clinical development and commercialization. Before joining Adrenomed in March 2022, Dr. Jones served as CEO of Fusion Antibodies Plc. Previously, he was CEO for several UK and European private companies as well as SVP, Head of Europe for a US based public company. Also, he gained expertise at Novartis and GSK as VP, Medicines Commercialization Leader, Global Haematology at both companies. 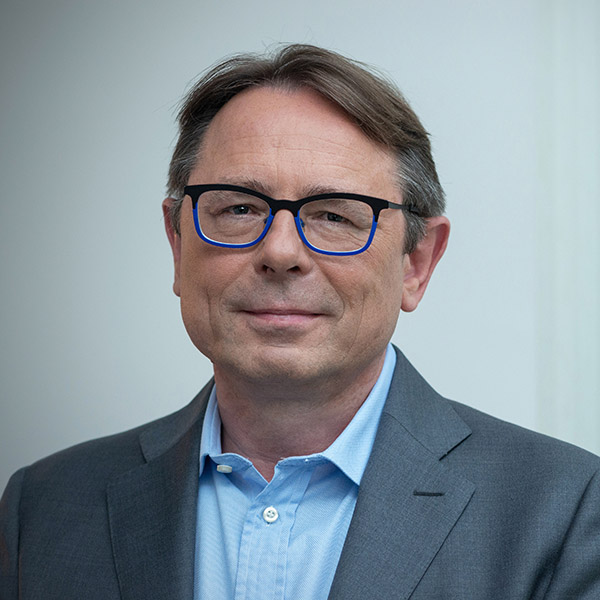 Dr. Andreas Bergmann, co-founder and Chief Scientific Officer (CSO) of Adrenomed and CEO of sphingotec GmbH and 4TEEN4 Pharmaceuticals GmbH, has deep knowledge and experience with the disease biology and diagnosis of sepsis. As inventor of more than 100 patents and co-founder & former executive manager of B·R·A·H·M·S AG, he helped to change the standard of care in sepsis by developing Procalcitonin, the diagnostic gold standard sepsis biomarker.

David Germonpré, Chief Financial Officer (CFO), has over 15 years of experience as finance leader and strategist. Before joining Adrenomed in July 2022, Mr. Germonpré was Partner at MTIP, a Switzerland-based health-tech growth capital investor. Previously, for the Gemma Frisius Fund he invested in spinouts from Belgium’s KU Leuven. Between 2009 and 2013 David advised the Government of Flanders on its VC and PE programs. Prior to that he worked as investment banker at Dexia Bank, executing M&As and IPOs of big corporates. 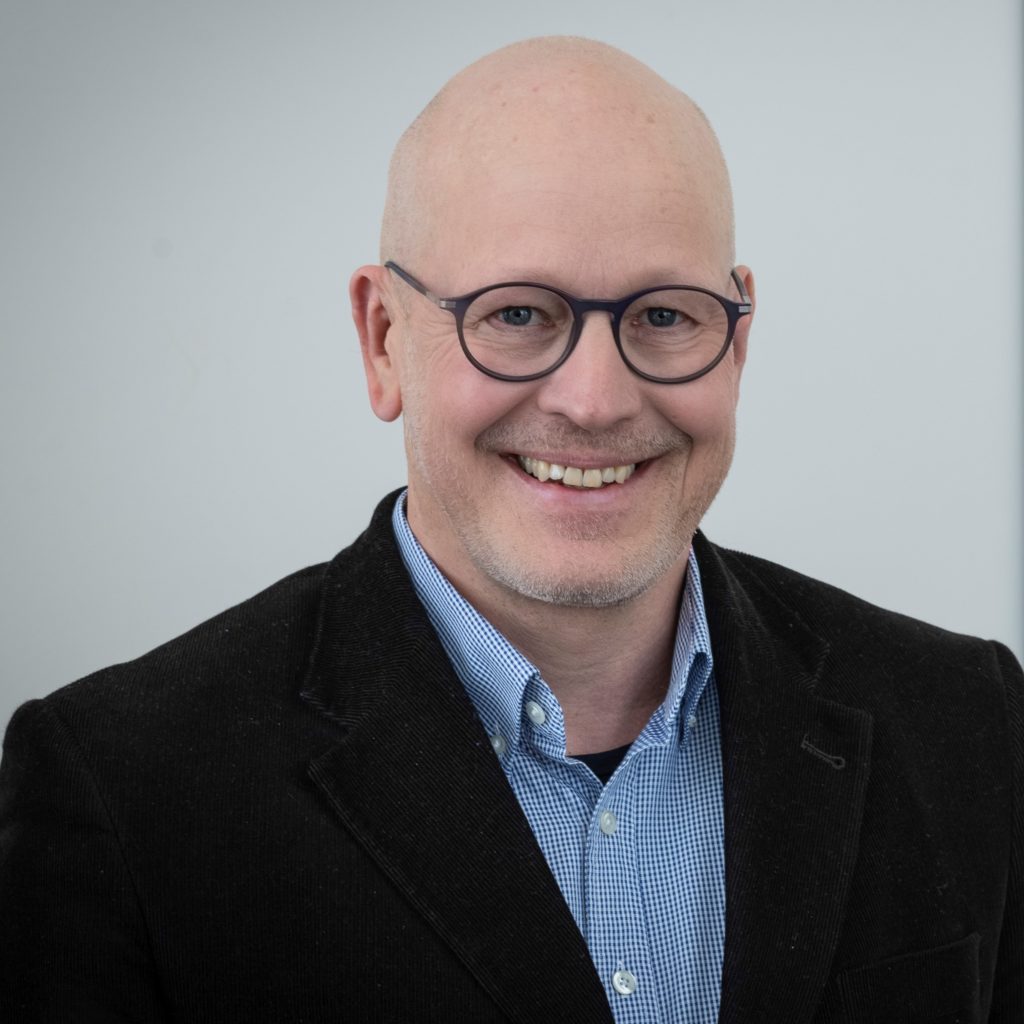 Dr. Stephan Witte is a drug development professional with over 20 years’ experience in clinical drug development and registration and a strong disease expertise in sepsis and septic shock. Before joining Adrenomed, Stephan Witte, Ph.D., was Vice President Clinical Science & Operations at Atriva Therapeutics, a clinical-stage biotech company focusing on antiviral therapeutics. Prior to that, he was Vice President Clinical Trials at Breath Therapeutics and Head of Clinical Development and Regulatory Affairs at Inotrem, a biotech company specializing in inflammatory syndromes including septic shock. 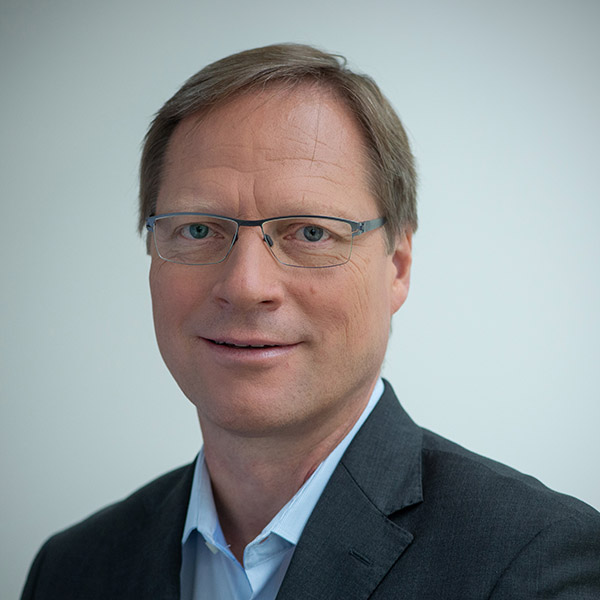 Dr. Joachim Struck is co-founder of Adrenomed and serves as Head of R&D since 2013. Before joining Adrenomed, he started his industrial career in 1991 at Henning Berlin GmbH (later B·R·A·H·M·S AG and Thermo Fisher Scientific). There, he developed several immunoassays and was responsible for discovery and clinical profiling of novel biomarkers as well as IP development. He is co-inventor of more than 50 patent families and is co-author of more than 200 peer-reviewed scientific publications. 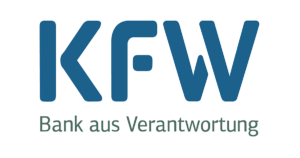 Adrenomed is dedicated to saving the lives of critically ill patients by translating the concept of personalized medicine to acute care. We are targeting Adrenomedullin, a peptide hormone with protective effects on endothelial barrier integrity. With a biomarker guided approach utilizing the target Adrenomedullin for patient selection, Adrenomed is developing a unique and holistic approach to rescue vascular integrity in life-threatening conditions such as sepsis and septic shock.

The Company’s lead product candidate is Adrecizumab (HAM8101; INN: enibarcimab), a clinical-stage, first-in-class drug targeting loss of vascular integrity. The strong rationale for Adrecizumab is supported by the elegance of its mode of action, a monoclonal antibody that on binding to its target Adrenomedullin preserves its functionality as regulator of vascular integrity.

Adrecizumab targets Adrenomedullin (ADM), a vasoprotective peptide hormone. As a small peptide, ADM can easily leave the bloodstream by crossing the endothelial barrier and entering the extravascular space, where it affects vascular smooth muscle cells (VSMC) and regulates vascular tone by promoting vasodilation—an unwelcome effect in the context of sepsis as it contributes to increased hypotension and organ damage. ADM that remains in the bloodstream, however, has a different effect, one that helps mitigate sepsis: promoting stability of the endothelial barrier by restoring the cell junctions between endothelial cells that ordinarily regulate molecule transport and leakage. In health, levels of ADM in the bloodstream and extravascular space are in equilibrium so that endothelial barrier integrity is maintained and blood pressure remains normal. 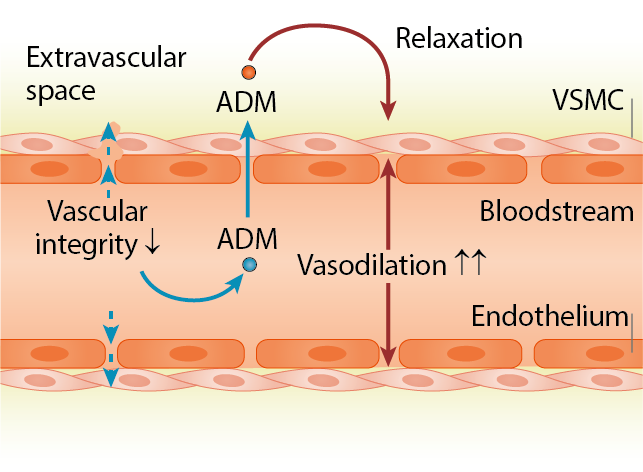 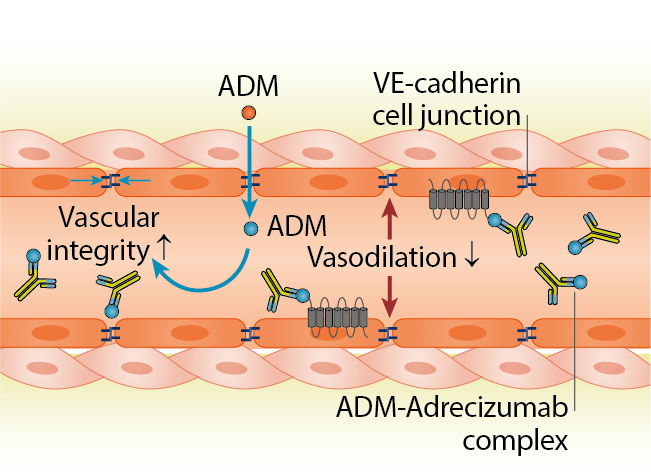 In sepsis, more ADM is produced to counteract loss of endothelial barrier function, but as the endothelial barrier becomes more permeable as a result of systemic immune dysregulation, more ADM enters the extravascular space in a dangerous cycle that can contribute to shock and organ failure.

Administration of the monoclonal antibody Adrecizumab results in an elevation of ADM concentration within the circulation. The ADM-Adrecizumab complex is functional, thus ADM can still act on the endothelium. Consequently, Adrecizumab treatment immediately and precisely promotes ADM’s protective effects on the endothelial barrier.

For further information on the mode of action of Adrecizumab see title story and editorial in the peer-reviewed journal SHOCK (Shock, 2018).

Furthermore, based on analyses of blood samples from well-defined patients, Adrenomedullin was reported as a therapeutic target and biomarker (bio-ADM®) for vascular integrity in several peer-reviewed scientific articles (Crit Care Med,  2020; Crit Care, 2018; Shock, 2018).
The recently marketed Adrenomedullin assay (sphingotest® bio-ADM®) allows the identification of patients suffering from loss of vascular integrity and will enable physicians to specifically treat these people by using Adrecizumab.

The lead candidate Adrecizumab is ready for a pivotal trial. In the AdrenOSS-2 (proof-of-concept phase II trial in septic shock) Adrecizumab demonstrated a favorable safety profile, was well tolerated and showed improved organ function and survival compared to placebo.

The monoclonal antibody Adrecizumab, presented a favorable safety profile in septic shock patients. Thereby meeting the primary trial objective. An improvement of organ function and a subsequent reduction of mortality has been observed.

A pre-specified biomarker analysis illustrated that treatment with Adrecizumab after ICU admission resulted in a rapid and sustained improvement of systemic organ function (SOFA score). Subsequently, the relative mortality was reduced by more than 30% after day 28. The positive effect on survival persisted over 90 days.
For further information please see the following article.

The biomarker-guided, randomized, double-blind, placebo-controlled proof-of-concept trial AdrenOSS-2 investigated the safety, tolerability and efficacy of Adrecizumab in 301 patients with early septic shock and elevated blood levels of Adrenomedullin. The multi-centre trial was carried out in Belgium, France, Germany and the Netherlands. In addition to standard of care, patients received Adrecizumab or placebo. The Phase II trial design was published in BMJ Open (BMJ Open, 2019).

Results of Phase I trials evaluating Adrecizumab safety and tolerability 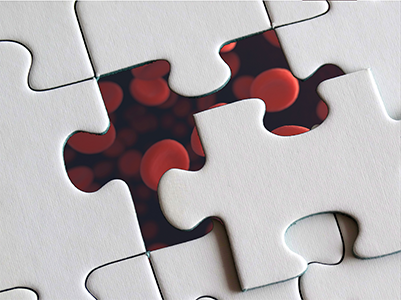 Conditions that are most threatening to life, such as sepsis, septic shock, and acute heart failure, are driven by severe impairment of the vascular endothelial barrier presenting in porous, leaky blood vessels and resulting in tissue congestion and edema. Ultimately, the rapid fall in blood pressure and diminished oxygen supply to organs leads to multiple organ failure and death.

Since its discovery in 1993, the vasoprotective hormone Adrenomedullin has attracted a great deal of interest as a multifunctional regulator of the vascular system.
In the circulation, Adrenomedullin directly tightens the gaps between endothelial cells, subsequently preventing vascular leakage.

Adrenomedullin (bio-ADM®) was validated as therapeutic target and biomarker as reported in several scientific publications. Rising bio-ADM® values in patients’ blood samples clearly indicate a worsening of vascular integrity independent from inflammation or any other comorbidity, reflecting the patients need for a targeted therapy addressing this pathophysiology.

Every year, millions of people around the world are affected by sepsis. In the US, sepsis contributes to between one third and half of deaths of hospitalized people, making it the number one cause of death in hospitals (JAMA, 2014). The annual cost of treating sepsis patients amounts to US$24 billion (Crit Care Med, 2018) in the US alone.

Sepsis has been defined as a life-threatening organ dysfunction caused by a dysregulated host response to infection (JAMA, 2016). This means that the body’s systemic immune reaction to an infecting pathogen gets out of control and starts affecting tissues and organs. Alongside these inflammatory responses, different regulatory systems such as cardio-vascular, metabolic and coagulation are affected.

A central driver of the pathogenesis of sepsis is the increasing loss of endothelial barrier function. In other words: The loss of vascular integrity. This leads to an uncontrolled leakage of fluid, proteins and cells into the surrounding tissue.

Patients suffer from a rapid drop in blood pressure (hypotension) and strong abnormalities in circulatory, cellular, and metabolic function. The reduced blood pressure, which further limits oxygen supply to organs (hypoperfusion), contributes to the development of multi-organ failure and death.

The current standard of care for septic shock patients is limited to anti-infectives, administration of vasopressors, fluids and supportive care. 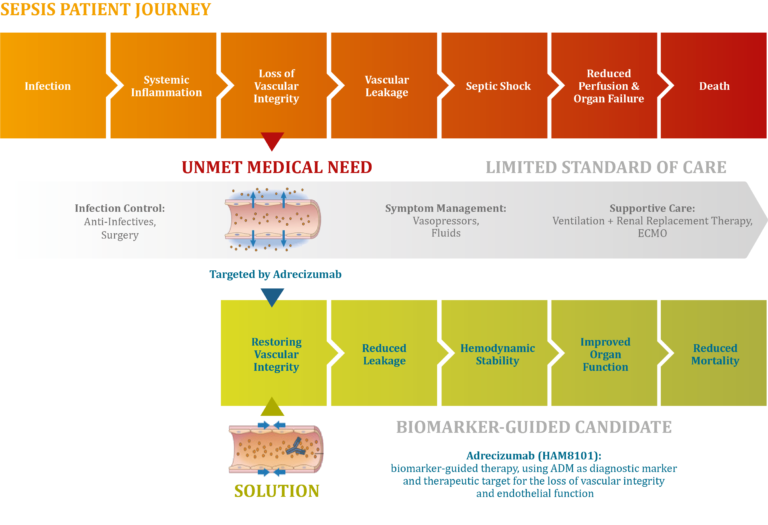 In COVID-19 and sepsis, a common disease mechanism is the compromised endothelial barrier with an uncontrolled permeability.
SARS-CoV-2 replicates in endothelial cells and leads to a breakdown of the endothelium via inflammatory pathways. This subsequently results in vascular leakage and severe impairment of organ function (Nat Rev Immunol, 2020; Nat Rev Immunol, 2021). High adrenomedullin levels indicating loss of vascular integrity are associated with worse outcomes and increased mortality in COVID-19 patients (J Clin Med, 2021). 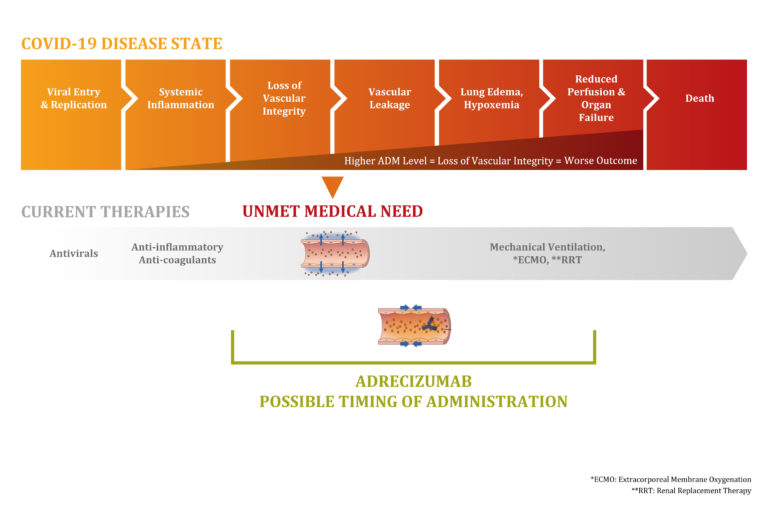 At the beginning of the pandemic, the University Medical Center Hamburg-Eppendorf (UKE) in Hamburg, Germany, conducted a case series in critically ill COVID-19 patients with promising results (Biomolecules, 2020). Following this, the UKE is initiating and conducting a multicenter Phase II clinical trial to evaluate Adrecizumab in hospitalized patients with moderate to severe COVID-19 (ClinicalTrials.gov Identifier: NCT05156671). The clinical trial and the manufacturing of Adrecizumab are supported by funds from the German Federal Ministry of Education and Research (BMBF).

Hennigsdorf/Berlin (Germany), October 13, 2022 – Adrenomed AG, the vascular integrity company, today announced its participation in upcoming industry and investor conferences. The Adrenomed management team will be available for meetings to present and discuss the plans for its global

Watch: Adrenomed tackling huge issue of sepsis By Jim Cornall December 19, 2022 Adrenomed AG is a German privately financed, clinical-stage biopharmaceutical company. Its mission is to rescue vascular integrity in order to save the lives of critically ill patients

by Ian Schofield Executive Summary RedHill’s opaganib has shown “potent inhibition” of the Omicron variant in early studies, while the EMA has found nolinks between the mRNA vaccines and autoimmune hepatitis.   Read the full article here.

Hennigsdorf/Berlin (Germany), October 13, 2022 – Adrenomed AG, the vascular integrity company, today announced its participation in upcoming industry and investor conferences. The Adrenomed management team will be available for meetings to present and discuss the plans for its global

Adrenomed – a clinical-stage biopharmaceutical company, located in the Berlin area.

We are a multi-disciplinary, international team committed to pioneering the development of precision medicine for critically ill patients with limited treatment options.

We are always looking for talented, dedicated professionals to join our team. Check our current job listings to find out more.

Applications are always welcome, even if we do not have any listed openings. Please submit a resume and cover letter to career@adrenomed.com.